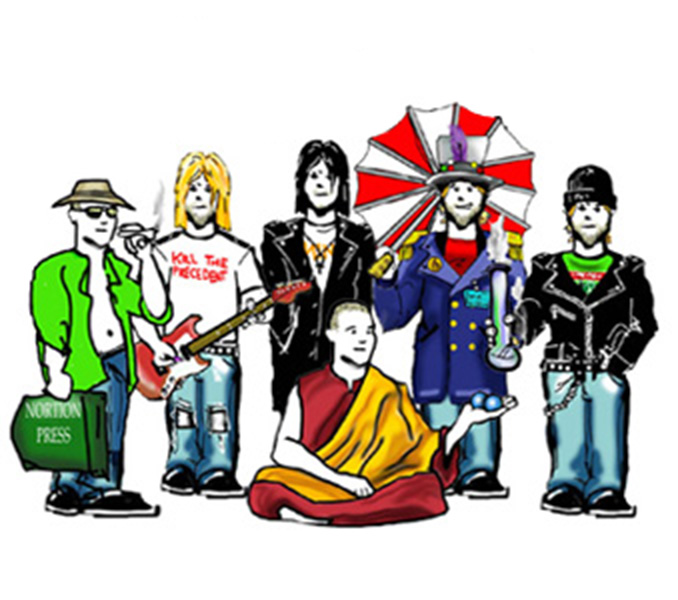 When I was in elementary school someone asked me what my greatest fear was, and I said late onset multiple personality disorder. Although now they call it dissociative identity disorder. I explained that I had this fear that who I was, and what I thought, or felt, didn’t matter if I became someone else entirely later in life. But now that I’m older, and know that this happens in the normal course of life, I can’t help but feel plural.

My parents were world travelers, and I didn’t enter the American school system until second grade. I experienced a culture shock similar to immigrant children entering American society mid-stream. At the time, my classmates were obsessed with the social status of shoe brands. Owning Nike Air Jordans was the price of entry in some social cliques, and there was a hierarchy of brand identities that conferred social clout. I, on the other hand, was not accustomed to wearing shoes at all, and had no conceptual reference for the meaning of brands. Ironically, as an adult graphic designer, building brand identity for clients is a central function of my service.

I was called “retarded” and “glitch” by my elementary school peers, so to explain my peculiarities I concocted this elaborate lie about where I came from. I told them that I was from a race of highly advanced extraterrestrials. I told them that my species maintained their genetically superior intelligence by removing the “retarded” from their genepool by killing their offspring before they were old enough to procreate. I told them that my biological parents rescued me from that fate by sending me to a planet primitive enough for me to fit in, but that they over-shot. It’s the silly fantasy of a silly child, told primarily as a way to reclaim the r-slur. But like all fiction it contained a kernel of truth. I was alienated from my peers primarily because I did not think as others thought. Because I am not neurotypical.

When my parents got divorced they put me in therapy as a precautionary measure. A wise move. Dr. Gonzolvas told me that every 7 years or so we experience major life changes that warrant conceiving of ourselves as an entirely new person. So, to observe these transitions, I held funerals for my previous selves. The first, I performed alone when I was 14. The second was a huge house party when I was 21. There were a hundred guests or more, and I invited close friends to read eulogies in my memory. I spent the entire party laying silently in an open casket. I’m 39 now and in the middle of my sixth self.

In high school I had a falling out with my mother and moved in with my dad, which meant switching schools my senior year. I used it as another opportunity to reinvent myself with an elaborate lie. I told my new peers that I was a child of the circus. Another fiction that contained a kernel of truth.

One of the greatest compliments I ever received was from a high school friend who said, “Davi is some of my favorite people.” It was the first time in memory that I was acknowledged as plural.

In college an identity emerged named Jason Monroe who claimed to be me from 5 years, 5 months, and 5 days in the future. He said he was there to guide me through tough decisions I lacked the wisdom to make myself. Whenever anyone confronted me about my various campus antics I told them it wasn’t me, but my friend Jason. Jason and I co-authored a book. He had a column in a student magazine. And by the time I graduated Jason was such a presence on campus that strangers told me they had met him. It turns out many of the alters of people with dissociative identity disorder emerge as protectors of some kind.

I’ve never had an alter (If that’s what we’re calling them) that took the reins without permission. I’ve always been able to channel rogue identities into fiction, where I could govern the limits of their autonomy. I’m told this is a common experience for writers. I’ve also never had a malevolent alter, which may be why I find writing (and understanding) villains so difficult. They can be assholes. Even merciless. But I’ve never felt an inclination toward vengeance, or retaliation. My alters have always been subtle voices that stand up for themselves better than I stand up for myself.

I have always suppressed my alters. Heck, I murdered Jason. Probably because of that childhood fear that I’d lose myself if I didn’t keep them in check. But at the end of the day, I am my alters. I am plural. In the simplest terms, in the most convenient definitions, you see us as you want to see us.