12-year-old Max has escaped the smoldering ashes of his former school with some new friends. But now they are being hunted by a vengeful sheriff, and a heartless scientist. They discover there are more communities of survivors than they ever imagined, including some familiar faces Max thought he’d never see again.

Life in the cabin was strange. It felt like home, because it literally was home. But everyone that belonged there was gone, mainly Dad. Maybe worse than that, no one who was there seemed to belong, most of all me. The cabin had been taken over by strangers, and I had to figure out how to live with them.

Before Ellie, Holland and I arrived, the strangers had devised a system for sharing responsibility. Every morning Alix, Darleen, Torrance and Hephae put their toothbrushes in a cereal box, shook them up, and drew them out at random. The owner of the first toothbrush pulled was “Dad” for the day, the second was “Mom,” the third was the “Kid,” and the last toothbrush got to pretend to be a cat for the day. That way no one ever got to tell everyone what to do all the time.

Sometimes they trade roles if both people agreed, but mostly they just conspired to keep Torrance the cat as often as possible, since he was so unreliable. But if Torrance got picked for “Mom” he always refused to trade, and on those days they played games all day, with couch cushion forts and squirt guns.

Those rules worked for them, but within a week there was disagreement over how to include us in this bizarre family ritual.

“We obviously can’t have more than two parents,” insisted Alix. “The other three toothbrushes just have to be more kids.”

“Or a dog for the cat to play with!” suggested Torrance.

“Keep in mind, Stinky is an actual cat,” Ellie pointed out.

“Guys, we can’t have too many kids,” said Hephae. “We won’t have enough people doing the actual work. We need two dads, two moms, two kids and two pets.”

“Then we make Stinky the cat all the time,” suggested Alix. “And to make it fair we’ll make Torrance always the dog.”

“What if the dads, or the moms disagree?” asked Darleen.

“Guys,” I said, “If society collapsing taught me anything, it’s that nobody should get to tell anyone what to do. And no one should have to do what anyone else says, no matter what.”

We all looked at her a little confused.

“We’ll turn the cabin into a pirate ship!” Alix said. “My bed is a captain’s bed. Let’s call my room the captain’s quarters.”

“And we can call the kitchen the galley . . . and the bathroom the privy!” exclaimed Torrance.

“If you like,” I agreed. “But a pirate captain isn’t like a Navy captain. Everybody on a pirate ship is equal. A captain really only has final say during battle. They can make plans, but big decisions are made by negotiating with the other officers.”

“What other officers?” asked Alix.

I knew a bit about historical pirates from Dad. “Well, the first officer is called a quartermaster–”

“Ok. ” I thought. “Let’s just call the quartermaster the first mate. They assume command if the captain is incapacitated, and they’re in charge of rationing supplies to the crew.”

“What else?” asked Alix.

I tried to remember. “Sailmasters are navigators. We can just call it that. It’s not like we sail, but we need someone to make maps of places to search for supplies.” I paused. “There’s a bunch of others. The chef cooks, obviously. Some ships had surgeons. A boatswain maintenanced and repaired the ship. A swabbie mopped the deck like a janitor. The cannons were operated by gunners and powder monkeys.”

“I get to be the powder monkey!” Torrance began bouncing around, scratching his head and armpits like a monkey.

“A boatswain sounds like a chief engineer on starships in Tsar Trek,” said Hephae.

“You like Tsar Trek!” bubbled Holland. “Kosmos Five or The Next Acquisition?”

“Neither,” answered Hephae. “Vortex is the best.”

“If we’re going to be space pirates I want to be the helmsman. That’s basically a navigator,” insisted Holland.

Ellie, Holland and I voted for me. Hephae, Alix, Darleen and Torrance all voted for Alix, because she was the oldest. That’s fine. The crew is the real power on a pirate ship, not the captain.

Alix made me first mate to keep it fair, which was perfect, because managing the supplies was the most important job anyway. Plus they didn’t even know about the emergency supplies in the bunker under the cabin, and I wanted to keep it that way for the time being. Torrance insisted on being the powder monkey because he liked the name, although we didn’t actually have cannons. Ellie volunteered to be gunner and dubbed Torrance her ammo monkey and he agreed. She’d be in charge of weapons, and he’d be in charge of ammunition. Hephae liked the sound of engineer. He devoted himself to reinforcing the fences and entrances with a stack of old plywood he found in the cargo bay.

Darleen and Holland both wanted to be navigator and plan away missions. Darleen just wanted to get outside. She’d been cooped up for weeks because when Alix was Mom she made her stay inside, and when Alix was Dad she wouldn’t let her go outside, so either way Darleen was stuck. To Darleen the cabin was a cage. A consensus cage, but still a cage. Holland was a tinkerer, and wanted to search for the equipment he wanted.

So, we combined the navigator, the chef and the swabbie. Darleen and Holland could both lead away missions, but at home they both needed to cook and clean.

Oh, and Torrance insisted that Stinky was a parrot.

That was our crew. Everyone agreed. The only question left was what to call the ship. Niles and Hephae were full of suggestions from Tsar Trek. The ISS Decenterprise. The ISS Recovery. But Torrance had another suggestion.

“What does that mean? I asked.

“It’s a baby porcupine!” he yelled with great enthusiasm.

We all laughed and agreed it wasn’t worth arguing him.

Later that day I heard unintelligible shouting from the roof. It was Ellie in the crow’s nest. She saw something in her new telescope, and was calling everyone up to see.

Torrance was helping Darleen make lunch in the galley, until he decided to race me up the stairs. Holland and Alix followed from the studio. Hephae was already in the crow’s nest with Ellie, tampering with a new antenna.

It was tight quarters with all eight of us stuffed in that little room, trying to look out the same window.

“Let me see!” cried Holland, reaching for the telescope.

“Hands off!” yelled Ellie. “Use the binoculars.”

He peered into the binoculars and screamed, “UFO!!!” pointing and waving frantically.

At first I thought it was some kind of amateur hot air balloon, floating above the treeline across the lake.

“What? Where?” Torrance squirmed his way to the front of the group and popped his head through the window hatch.

As it drifted closer it became obvious they were helium balloons tied to a person. Clouds offer no sense of scale.

“Is it dead or alive?” Ellie took the binoculars from Holland, and handed them to me.

I couldn’t tell at that distance. It looked grey like the dead, but it also had bright purple hair and a striped shirt. “I think it’s a clown.” I gave the binoculars to Hephae.

We all watched as it drifted over the lake.

“Let’s shoot it down.” suggested Ellie.

“I said shoot it down, not shoot it! Let’s shoot the balloons.”

“Guys!” injected Hephae. “He’s got something pinned to his shirt.” He crammed his eyes into the binoculars. “It’s like a name tag, but I can’t read it. He’s too far away.”

“I got this.” I held the telescope up and fiddled the knobs to focus. “Oh, he’s dead alright.” I paused, “The name tag says, ‘Hello, my name is Emilio Airhart, property of Syrkis Barker.’”

Holland answered first. “It’s the guy who stands out front of a carnival and yells, ‘Come one! Come all! Come see the strangest freaks, the highest acrobats!’”

“No,” I interrupted. “It’s Syrkis, not circus. It’s somebody’s name. It sounds Russian.”

“Guys, it gets worse.” Alix had the binoculars. “Look over there!” She pointed to the trees across the lake.

Dark figures were lurking out of the woods and onto the ice. Just a few at first, but soon they looked like a line of ants walking across the lake.

“Do you hear that?” asked Alix.

We all got quiet and strained to hear. Everyone else heard it before me. In the distance, almost too faint to hear, but getting louder all the time, was the shuddering sound of carnival music with the twang of Spanish guitar.

“They G’s are following the sound!” I realized.

Of course, the lake was only frozen around the edges. So, as the G’s crossed they stepped aimlessly over the edge, and bubbled to the bottom of the lake.

We turned our attention back to Emilio as he floated overhead. He definitely saw us. I made eye contact. But he made no effort to even reach in our direction. Just this hopeless look on his face, like he just gave up trying.

“Now can we shoot it down?” asked Ellie. “I bet I can hit it from here!” She took aim, struggling to find the elbow room to hold the rifle correctly.

“But I’ve been practicing,” insisted Ellie.

“I want to see where it’s going,” Alix wondered. “To see who it belongs to.” She thought. “Max, take an away team and go after it. You can take the shotgun. Ellie, take the pistol.”

“Fine, whatever,” agreed Alix. “Then leave the pistol here.”

“Hephae, pick a weapon and go with them,” ordered Alix.

“No way. This is a bad idea,” countered Hephae. “You have no idea who put that thing in the air. They could be hostile. We should just shoot it down and take that sound equipment.”

“That’s all the more reason to find them,” injected Ellie. “To see how far away they are, and how dangerous they are.”

“Not a priority!” insisted Hephae. “We have food. We have shelter. It’s stupid to go wandering off on some half baked adventure when we’re safe here.”

“Hey!? What about me?” protested Darleen. “It should be me on this mission!”

“No!” said Alix. “You need to stay here to watch Torrance.”

“I can watch myself!” countered Torrance.

“Guys!” I interrupted. “Emilio’s not waiting for us. If we’re going after him we’ve got to go now!”

I grabbed the binoculars and we ran after Emilio Airhart. 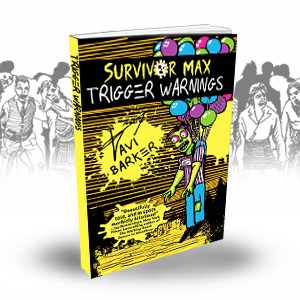