Original art in this collection is priced to afford both artists a $15/hour wage. Haggling encouraged.

An 8″ x 10″ original collage by Davi Barker depicting Wanda Maximoff (Scarlet Witch) and Vision as they appeared in both the bronze age marvel comics (pre 1985), and the show “WandaVision” made from pieces of Avengers comics published by Marvel comics across multiple decades:

This piece comes under glass in a frame customized by Davi Barker for a total dimension of 12″ x 13″.

When I started this piece I intended to recreated the poster of the WandaVision show, where the characters are shifting from their full-color movie depictions to their black and white vintage television variants, which is a theme in the show. But instead I shifted them from their full color movie variants to their original vintage comic depictions. In addition, I constructed the bronze age portion out of bronze age comics (pre 1985) and the modern portion with modern comics (post 2000), which are much glossier and brighter.

Be the first to review “WandaVision (Original Art)” Cancel reply 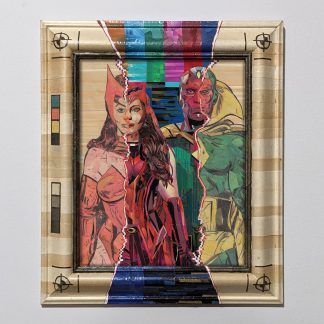